Gijon is a quant, cobblestone-paved city, situated on the Atlantic coast of Spain. With a population of approximately 275,000, this busy commercial port is located in the Spanish region of Asturius and is divided by a small fishing village named Cimadevilla, meaning “top of village.” As the main tourist attraction of the port, most of Cimadevilla’s buildings have been restored to capture the colorful life of the original Spanish village. A hike up the hill through the village, leads to a local park at the tip of the peninsula, Cerro de Santa Catalina, where you can enjoy breathtaking views of the coastline. Standing as tall as a house in the middle of the park, Eligio del Horizonte, or “Praise the Horizon”, is one of 16 public sculptures scattered throughout the city. Take in some culture by visiting the Museo de la Gaita, which displays bagpipes from across the world, or soak up sun on the city’s main beach, Playa de San Lorenzo. Gijon blends modern and traditional culture into a fascinating glimpse of Spain’s rural countryside. 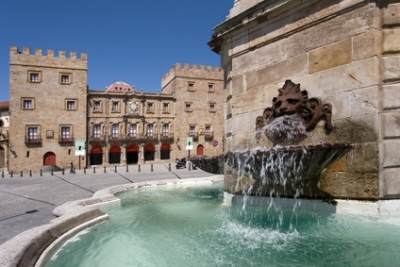